Lord, what am I doing here? 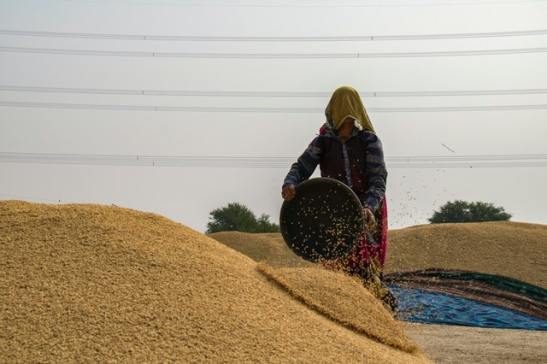 Naomi and her daughters-in-law become widows. She urges Ruth and Oprah to return to their families knowing they could remarry and have a chance at a happy life in Moab. Orpah returns to her home after much insistence, but Ruth is determined to stay with Naomi.

Together they travel to Bethlehem. They survive with food gathered by Ruth from the left-overs of harvest in the farmer’s fields.

One day, as Ruth was gathering food, a wealthy landowner named Boaz notices her and learns that she is the daughter-in-law of Naomi. Boaz is a relative of Naomi’s late husband. He makes sure she has enough to gather for them to eat. Naomi is pleased to learn that Ruth is now  working in Boaz’s fields. Despite being a foreigner in the land, despite her background, despite her past, she finds favor in his eyes and thus finds a new beginning.

Boaz redeems everything that belongs to Naomi including her daughter in law, Ruth. Boaz marries Ruth and becomes their kinsman Redeemer because of whom, Ruth is no more collecting leftovers but is a partaker of the entire field that belongs to Boaz.

This role stems from Leviticus 25 where a relative can redeem property by bearing the cost himself. This redemption would bring restoration to destitution. The redeemer helped the helpless.

At this, she bowed down with her face to the ground. She asked him, “Why have I found such favor in your eyes that you notice me—a foreigner?”

The redemption by Boaz is a picture of what God has done for us. By acting as a redeemer for Naomi and Ruth, Boaz is a type of Christ.

Jesus came to the spiritually hopeless and those enslaved in sin and in a helpless state. Like Boaz, Jesus is the relative who has redeemed us, by His precious blood. Like Boaz Jesus is an instrument of the Lord’s filling up what was empty.

Because we are redeemed by His blood our portion is no longer leftovers but better things and greater things.

Therefore, when we come under the Lordship of Jesus, every attack of sickness, lack or misfortune loses its authority over us.

Today, if you sense something missing in your life, if you are suffering from loss, if you are troubled looking at the uncertainty all around, I encourage you to get into a time of prayer. Get into the presence of the Lord and know that He is your kinsman Redeemer, a relative who has gone to the extent of shedding His blood to protect you, to ensure your well-being and to restore to you everything you have lost including lost honor, wealth and happiness.

If you would like to know the full story and listen to a personal testimony please feel free to click this link and view a short video on YouTube.